Researchers say they have developed the most detailed model of a human yet, a movable "4D" image that doctors can use to plan complex surgery or show patients what ailments look like inside their bodies.

Called CAVEman, the larger-than-life computer image emcompasses more than 3,000 distinct body parts, all viewed in a booth that gives the image height, width and depth. It also plots the passage of time - the fourth 'dimension.' 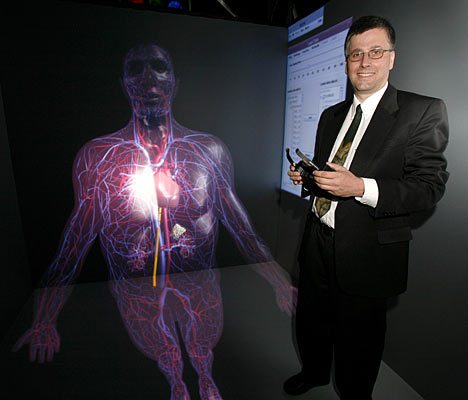 Scientists can layer on the unique visuals of patients, such as magnetic resonance images, CAT scans and X-Rays, giving physicians high-resolution views of the inner workings of the body while it appears to float within arm's reach.

It will help researchers study the genetics of diseases such as cancer, diabetes, muscular sclerosis and Alzheimer's, said officials at the University of Calgary, which has worked on the system for six years.

Doctors will be able to show patients what is going on inside their bodies Mr Sensen said.

"Today, this kind of a model is unique in the world. It's the only one that is complete," said Director Christoph Sensen.

The model was started partly due to a desire among massage therapy teachers for a more intricate picture of muscles and bones.

Seen through 3D glasses in a booth, the model appears to stand in front of the viewer. As in a video game, the controller can manipulate it and focus on body parts - skin, bones, muscles, organs and veins.

"We say that killing monsters is fun, but curing cancer is more important," Andrei Turinsky, a mathematician and computer scientist, said as he moved the model around using a joystick. 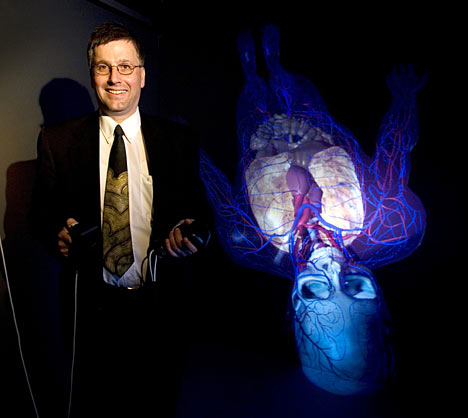 The closer the image gets, the further into the body the viewer appears to travel. It is difficult to resist trying to touch it. The image can also be loaded on to regular computers, to be viewed off site.

The medical community will benefit by being able to merge patients' diagnostic results - such as computerized internal images and blood tests - in one place, allowing specialists to work together more closely, Mr Sensen said.

In addition, surgeons can use to plan surgeries before conducting them and use it as a teaching tool.

Patients will also gain much more understanding about their own conditions, he said.

The next step is to develop versions to sell to hospitals around the world, and adding a touch element to the image.